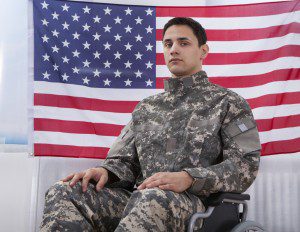 Every year, the Department of Defense holds an event called the Warrior Games. This paralympic-style sports competition invites wounded and injured servicemembers to participate in a competition to showcase the indominable spirit of the members of our armed forces. It’s an incredible event, so inspiring it caught the attention of Prince Harry who wondered why the rest of the world didn’t have an event like this. In 2014, the prince changed that, and the Invictus Games was born. Now, a Marine veteran from Oklahoma will be representing both our military and the United States of America at this year’s Invictus Games in Toronto, Canada.

Why Is Jessica Hammack Competing in the Invictus Games?

After joining the Marines, Jessica Hammack suffered a tear in her meniscus. This injury proved more than expected and after two years of searching, she finally found a surgeon willing to attempt a repair. This experience gave her a taste of what it was like living with a disability, but it was a car accident that really changed things for Hammack.

The top vertebrae in her neck was broken by that car crash, but it was a traumatic brain injury that did the most damage. The woman was having difficulty breathing and she couldn’t write her own name. The road to recovery was long, but with her family’s support, she made encouraging gains. However, continuing her service to our country became nearly impossible, so Hammack had to find new ways to contribute to the Marine Corps. As a veteran with disabilities, she has worked hard to inspire others and help her fellow servicemembers, and paralympic competitions have become her favorite outlet for support.

How Will Oklahoma Marine Fair at the 2017 Invictus Games?

In 2016, Hammack competed in the Warrior Games, a competition started by the Department of Justice where service members compete in adaptive sports competitions. While competing in New York, she came away with eight medals and a new record in her disability classification. Now she’s looking to continue her dominance in Toronto at this year’s Invictus Games.

Events like the Invictus Games are meant to inspire people with disabilities and show them that their injuries do not define them. As disability attorneys, we understand how important these paralympic events are, and appreciate the contribution athletes like Jessica Hammack make to proving people with disabilities are normal people. We can’t wait to see how this Oklahoma warrior does at the games!