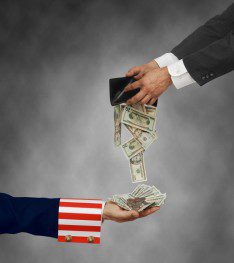 Do you remember the story we told you about a few weeks ago? The Government Accountability Office (GAO) compiled a report that said Social Security benefit garnishments had increased over the past decade. Around 114,000 people are having their benefits garnished and over half of those people are on disability benefits. However, many of these people shouldn’t have their benefits garnished.

Were Disability Benefits Illegally Garnished by the Government?

A 67-year-old man was notified in 2013 that his Social Security Benefits would be garnished because of his student loan debts from 1970. Back then, the man had entered college for a short time, but couldn’t continue attending school because of health issues. He was later diagnosed with schizophrenia and started receiving Social Security Disability insurance (SSDI). However, he still owed money on those loans.

So, the government had finally come to collect, but this man’s benefits were barely enough to make it on. After negotiating with the third-party government debt collector, he worked out a payment plan that would reduce the offset. But later, the man discovered that he qualified for Total and Permanent Disability discharge (TPD).

TPD wipes away a borrowers federal student loan debt if they have a permanent disability, but the 67-year-old wasn’t told about it. As he tried to negotiate a solution to his garnishments, the man had mentioned his disability. Yet still, third-party collectors and government officials didn’t tell him that he might qualify for TPD. Now the man is filing a lawsuit.

He claims the government failed to inform him that he qualified for the discharge of his debts, and so he should get the benefits he lost to garnishment back. The Department of Education, Department of Treasury, and the Social Security Administration are all mentioned in the lawsuit. Do you think this man has a case? Do you think his garnished benefits should be repaid? Log onto our Twitter and Facebook to tell us what you think. For updates on the situation keep following your Tulsa disability attorneys here at Troutman & Troutman.