We are drawing closer and closer to the 2016 presidential elections, and as we get closer to November more people are asking more precise questions about the issues they care about. For people with disabilities these issues can be even more important to their lives than other Americans realize. It’s the reason that many people were offended when Donald Trump seemingly mocked a disabled reporter, and it was the reason that disability advocates rallied when Hillary Clinton didn’t answer questions about her disability policies.

Are Disabilities A Priority To Politicians? 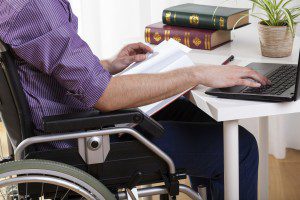 The Disability Integration Act (DIA) is a new bill building steam in Washington DC. It is built on trying to keep people with disabilities in their homes and out of nursing homes, and the DIA has the support of many advocacy groups. It is being hailed as the next step in bringing truly equal opportunities to those living with a disability, but the act has received very little press during this election cycle.

In response to the lack of press, advocates have started showing up at town hall meetings, and new online efforts are starting to bring the presidential candidates, and other high ranking politicians, under the microscope. The online campaign called #CripTheVote is magnifying the voices of people with disabilities, and with 56.7 million Americans living with disabilities, the movement’s voice is becoming very loud.

How Are Advocates Fighting For Disability Rights?

Advocates at a John Kasich rally in Greece, New York raised their voices after being placed behind a standing section during the town hall event. Kasich spent time with the group to try to ease their concerns and promised that he would do what he could for disabilities issues. When a similar incident happened at a Hillary Clinton rally, advocates were once again stirred to speak out, but it wasn’t until Bill Clinton spoke in Rochester—and reassured the group of Hillary’s dedication to disability issues—that the group began to feel that their voices were heard.

Do you think the efforts of these advocates will be enough to bring disabilities issues and the DIA into the national discussion? What are the views of the other political candidates involved in the race? Keep following our blog and we’ll let you know just where public policy on your rights are headed.

A message from the Tulsa disability attorneys at Troutman & Troutman—Where disability law is all we do!