According to Fox News, researchers have discovered that people with diabetes are much more likely to suffer from depression and other stressors, placing them at risk for stroke and death from cardiovascular disease. 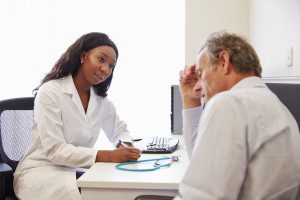 The news outlet reported that the worst outcomes result when people with diabetes suffer from both depression and stress at the same time. This trio of problems has been linked to more than double the risk of death from heart disease faced by people in the general population.

The study, authored by researchers with the East Carolina University Brody School of Medicine, is the first to show a pattern of increased likelihood for cardiovascular problems in those with diabetes involving stress and depression. Researches reviewed the data of nearly 22,000 adults, including close to 4,100 with diabetes, to complete the study.

This is scary news for people with diabetes—if you are struggling with stress and depression, it may be a good idea to talk to your doctor. In November, as part of American Diabetes Month, we discussed the prevalence of the disease in America. Unfortunately, nearly 30 million children and adults in the U.S. have diabetes.

If you have diabetes and it leaves you unable to work, you may be eligible to collect Social Security Disability Insurance (SSDI) or Supplemental Security Income (SSI). These benefits can help tremendously when it comes to paying for healthcare and living expenses.

For more information, you can visit our Social Security FAQ page.